Hindugrass on The State of Things with Frank Stasio on WUNC, 4/3/15

“Hindugrass’ sound can be encapsulated as a truss of classical Indian and Appalachian folk music. But it takes a mythical analogy to summon its fearsome beauty, like some fiery half-bird of fable, where the percussive heart thrums beneath meticulously woven wings. The group showcases sarod player John Heitzenrater’s own compositions, as well as his arrangements of everything from The Beatles to Eastern European folk dances. Heitzenrater’s virtuosity on sarod is matched by guitarist Jay Manley and tabla percussionist Chris Johnson. Adding cello, viola and violin, members and alums of Lost in the Trees and Prypyat swell the group to a chamber orchestra.”
- Sylvia Pfeiffenberger, Independent Weekly (Jan 18, 2012)

“Last fall, Béla Fleck, Zakir Hussain and Edgar Meyer stopped by UNC to play their new fusion of Indian and bluegrass music, but the local Hindugrass beat them to the punch by over a decade. Formed in 1998, the quintet blends Appalachian and North Indian traditions to create ragas punctuated as much by jaw harp as tablas. The sarod—think a deep sitar—guides many of the tunes, ringing somewhere between a dobro and banjo. Bass and fiddle round out a timeless and placeless sound that explores jams both breathless and contemplative. No stranger to bluegrass or improvisation, Megafaun’s Phil Cook joins for a free show on the lawn.”
-Andrew Ritchie, Independent Weekly (Mar 24, 2010)

“Many bands claim to have a “fresh new voice,” as Hindugrass does in its online bio. But this Durham group’s fusion of bluegrass and traditional Indian sounds actually lives up to that boast. Tastefully constructed, Hindugrass songs balance opposing textures and patterns. Banjo and mandolin converse with sitar and esraj in refreshing multicultural dialogues.”
—Jordan Lawrence 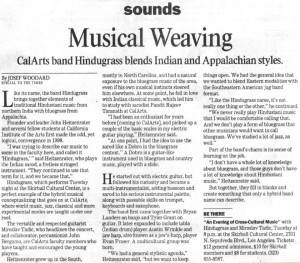 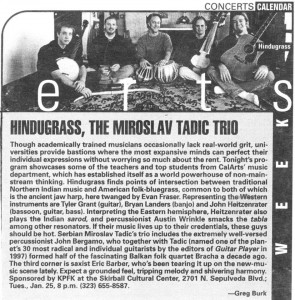 Interview with John in the Carrboro Citizen by Ashley Melzer:

If you ever found yourself wondering what dreams may come if the music of Northern India met that of the American South, consider your wait over: Durham’s Hindugrass is here to provide the answer.

If you’ve ever been curious what their adventurous leader John Heitzenrater has to say for himself…well, Gimme Five’s got your back. Check out his answers after the jump.

1. If your band were a family style dinner dish, what kind would it be?
Well, the pithy response would be that we are some sort of curried Brunswick stew or something, but I don’t think that would reflect all of our ingredients. Plus it sounds kind of gross. I think we’re more that dish you make when you’re left with a fridge full of random stuff that doesn’t seem like it could ever work together, but that’s what you’ve got, so you come up with some way to work it all together and end up surprised that it isn’t all that bad after all.

2. When can listeners expect new material from the band? What do you have up your sleeve?
We’re actually steadily producing new material all the time. About every show we either have a new piece or a reworking of a mostly new piece with new sections. We have six or seven of the new tunes ready to record for the new album we’re working on now, and seeds of the rest of them in various states of germination. Hopefully we’ll be done with tracking and mixing by the end of the year, but all of us have other bands, gigs and commitments, so some of the timing will depend on how our various tours and schedules line up. We’re also adding new players. Jenavieve Varga has been added on violin to the whole set of material at this point, and we’re looking at a few other folks to add as well (as soon as I get parts written for them). We should also have a pretty amazing stable of guest artists on the new CD (that list is still growing), but for now I’m going to keep that list up my sleeve.

3. Describe your ambition.
Back in the heady days of my late 80s prog-rock idealism, I wanted to change the world with my music. Over the years I’ve realized that it’s much more efficient to try to affect change by teaching one person or one classroom of people at a time how to make music a larger part of their world, either by teaching them to play the music they already love or write the music that’s in their soul or even just to have a better grasp of the history and function of music in general. There’s plenty of music out there already that can change things. I feel lucky to be able to be involved in as many different types of music as I am, and to be able to do only that all day every day, whether it’s performing or teaching or composing or recording or producing or whatever, and still not default on my mortgage or starve. For Hindugrass, I’d just like to keep bringing our sound to a wider and wider audience. I have fairly simple needs and prefer living fairly simply, so I guess I’m not targeting coliseum shows or anything, because those would mess that right up.

4. Who/what might be a few inspirations or influences that would really surprise people?
I listen to practically everything, and most of it influences me somehow, either in terms of form and structure or melodic ideas and orchestration or even just the timbres of instruments. I think a lot of people, especially musicians, meet me when I’m wearing one particular hat and are surprised when they find out I also wear the classical bassoon hat in addition to the Indian music one or that I have a bunch of extremely dark Roger Waters/Elliott Smith inspired songwriter-type material in addition to the New Music noise-palette overly-intellectual composition work or some other such apparent incongruity. All of that filters into Hindugrass somehow. The most surprising thing we’ve probably done as Hindugrass is to cover Michael Jackson’s “Billie Jean.” That was Jay’s idea, although he told me later that it was a joke. I took him seriously. We’re not allowed to play that anymore, though, because it gets stuck in our tabla player Chris’s head for several months afterward.